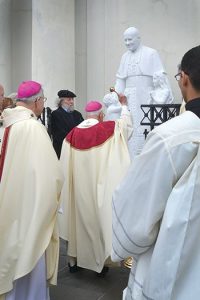 Archbishop Gregory Aymond authorized the construction of a marble statue of Saint Pope John Paul II, to be placed directly in front of St. Louis Cathedral. The American Italian Cultural Center along with Franco Alessandrini coordinated the development of this project. The statue commemorates Saint Pope John Paul II’s visit to New Orleans in 1987 and is a gift from the Archdiocese to the citizens of New Orleans for the tricentennial in 2018.

The Carrara marble sculpture was created by Franco Alessandrini in Italy. Alessandrini was born in Sansepolcro and splits his time between New Olreans and Italy.

Pope Francis blessed the statue at the Vatican on November 15, 2017 during a general audience.

On January 7, Archbishop Gregory Aymond blessed the statue after the Tricentennial Mass. The statue is located directly in front of St. Louis Cathedral. (Photo courtesy of the Clarion Herald)

If you’d like to support this project, please consider making a donation here.

The American Italian Cultural Center along with artist Franco Alessandrini coordinated the development of this project. Alessandrini created the Carrara marble sculpture in Italy. Pope Francis blessed the statue at the Vatican on November 15, 2017 during a general audience.

On January 7, 2018, the statue was installed in front of St. Louis Cathedral. The statue is a gift from the Archdiocese to the citizens of New Orleans for the tricentennial in 2018.

In November 2018, the film was recognized at the MirabileDictu International Catholic Film Festival in Rome, Italy.

This Wednesday, March 29, is the world premiere of the documentary and the Sansepolcro flag throwers will perform in front of the Prytania Theater prior to the screening. The documentary is in English and has a run time of 42:05.

World renowned painter and sculptor, Franco Alessandrini was born in Sansepolcro in the Tuscan Region of Italy in 1944.  His formal study of art and training was at the Art Institute of Florence.  He quickly built his portfolio and his reputation throughout Italy with his countless exhibitions and winning numerous prestigious awards. In the 1967 Franco became a resident of New Orleans, traveling back to Italy for shows and commissions.  In 1983 the President of Italy awarded him the honor of Cavaliere.  In 1984, he was the Artist in Residence of the Italian Village in the World Exposition held in New Orleans.

Over his long career, Alessandrini has become a master in many mediums, including:  marble and bronze sculpture.  He additionally creates graphic art design and print media.  In 2003, he established the Franco Alessandrini Cultural Association, a Non-Profit Organization which Sponsors Concerts, Art Exhibits and Art Instruction for his Community of Sansepolcro, Italy.  In 2011, the permanent home of the Franco Alessandrini Cultural Association Museum was opened in Sansepolcro. 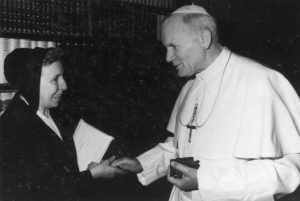 Pope Saint John Paul II was canonized by Pope Francis on April 27, 2014. He had visited New Orleans in September of 1987. It was the greatest moment in the history of the St. Louis Cathedral.

Today, we have a chance to rekindle our relationship with one of the great men of our time. Pope Saint John Paul II was born Karol Jozef Wojtyla and became the 264th Pope and the first non-Italian in 455 years, the youngest pope since 1848. He was a humble man who dispensed with the traditional Papal coronation and instead received ecclesiastical investiture with a simplified Papal inauguration in 1978.

His work led to the formation of Solidarity and would begin the process of Communism’s demise in Eastern Europe. When he kissed the ground at the Warsaw airport he began the process by which Communism in Poland – and ultimately elsewhere in Europe – would come to an end. He emphasised the dependence of man on God and His Law and the “dependence of freedom on the truth”.

John Paul II talked about the dignity of women and the importance of the family for the future of humanity.  The founder of  and the first post-Communist President of Poland Lech Walesa credited John Paul II with giving Poles the courage to demand change. According to Wałęsa, “Before his pontificate, the world was divided into blocs. Nobody knew how to get rid of Communism. In Warsaw, in 1979, he simply said: ‘Do not be afraid’, and later prayed: ‘Let your Spirit descend and change the image of the land.”

To learn more about the Saint Pope John Paul II Fund, please contact Stephanie via email: stephanie@americanitalianculturalcenter.com or by calling the American Italian Cultural Center at 504-522-7294.

The Statue in the News